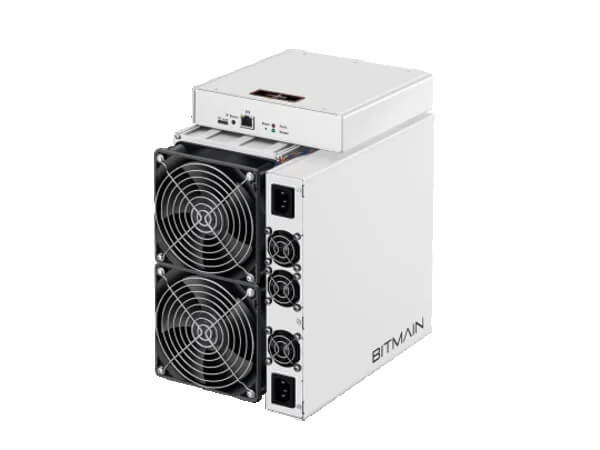 With this miner, you can mine over 43 coins. The most profitable are Mining Rig Rentals and BitcoinCash.  Other profitable coins include FreeCash, Mining Dutch, NiceHash, Zpool, among others. The miner uses the SHA-256 Algorithm and has a hash rate of 56 Th/s. Maximum power consumption is set at 2520W and comes with the Ethernet Interface. Temperature is set at 5 -45 degrees centigrade, and humidity is 5 – 95 percent. What makes this miner a must-have is the power to mine over 40 profitable coins.

It has an efficiency of 0,045j/Gh, which is quite impressive, considering the profitability expectations. Some of the mining pools associated with this unit include AntPool, NiceHash, Poolin, SlushPool, and ViaBTC. You can buy this miner from trusted vendors such as Coin Mining Central and directly from the manufacturer. The price of the miner will depend on the seller and the delivery option. ROI on Coin Mining Central is set at 1626 days or 54.2 monthly.

Bitmain is known for creating products with a high hash rate. And the Bitmain Antminer S17 (56 TH/s) is no different. It comes with a hash rate of 56 TH/s, which is impressive. And this is why the manufacturer is considered to be the best in the industry. The units don’t compromise value over quantity. The specs are impressive to allow users to mine over 4o coins, some of them being exotic. With a power of 2520W and Voltage of 12V, this is a must-have miner for all classes of miners.

The Profitability of the Bitmain Antminer S17 (56 TH/s)

Due to constant changes in the market conditions, the profitability changes from time to time. Our calculations are based on daily, monthly, and yearly profit levels. One day with this miner, you expect an income of $9, electricity cost of -$7, and an overall income of $2. Monthly electricity expense stands at -$217, income is $285, and profit stands at $67. The yearly electricity cost is -$2,600, and the profit is $815. It’s one of the most profitable miners from the S17 series.

A 180-day warranty is provided for this miner starting from the shipping date. The warranty only applies to the original purchaser.

All data is for informational purposes only. Mining Crypto can be a risky venture; beware. We won't be held responsible for any losses incurred while mining with the above miner.

Coins you can mine with Bitmain Antminer S17 (56Th)