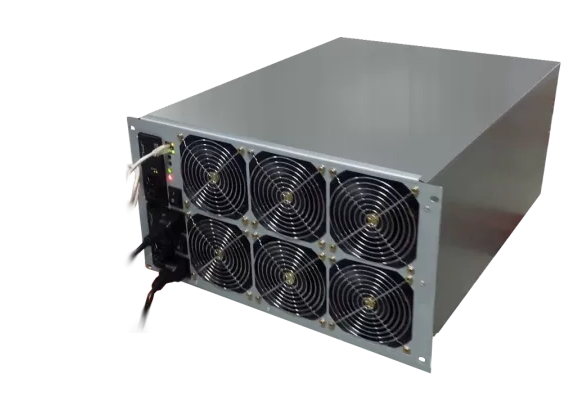 Bitfury B8 is another one from the Bitfury Company, and this comes with a maximum power consumption of 6400W. There’s a maximum hash rate of 49 Th/s, which is lower than other miners in the B series. The miner was released in December 2017 and has been in the game for a while. You can mine over 42 coins with this miner, making it one of the powerful units in the market. Mining Rig Rentals is the top coin, followed closely by Freecash and HashCryptos.

About Bitfury B8 Features and Specifications

The miner weighs 37000g and makes it one of the heaviest in the market. With this weight comes the pressure to perform and thus the high power consumption. Power consumption of 6400W warrants a miner with such a large weight. It comes with a 6U rack format and uses the Ethernet interface. The size of the unit is measured at 440*270*650mm. Other mineable coins found on this miner include Acoin, Curecoin, and Unbreakable.

There are large mining pools that are associated with this miner. These mining pools include AntPool, SlushPool, and ViaBTC.  You can get this miner direct from the manufacturer or selected stores.

Algorithm of Bitfury B8

The B8 Bitfury uses SHA-256 Algorithm, which enables it to mine over 40 coins. There are 42 coins to mine with this algorithm. Most miners favor this algorithm due to the versatility of coin mined. 6 chipboards support the algorithm

Efficiency of the B8 Miner

With such high power consumption, one expects the efficiency to be high. The miner has one of the lowest efficiency levels the industry has to offer. It comes with an efficiency rating of 0.131j/Gh. The efficiency is enough to mine profitable coins that include DigiByte, NiceHash, and Prohashing.

Hash rate of the Bitfury B8

The miner comes with 86 decibels, which means that this is best for industrial use. For those who plan to mine at home, ensure there are no neighbors around. The miner is best for large farm mining where noise levels don’t count for much.

The Profitability of the Bitfury B8

Just as with any miner, profitability depends on various factors. Top among these factors include market conditions (coin prices) and electricity rates in your area.

Warranty of the B8

There’s a 180-day warranty provided by the manufacturer. Other stores provide different warranties. Ensure you read the terms and conditions to know the warranty coverage.

Information provided is for educational purposes only. We won't be held liable for any losses incurred while mining with the above unit. Crypto mining is a risky investment

Coins you can mine with Bitfury B8