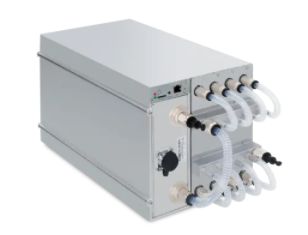 Bitmain Antminer S19 Pro+ Hyd (198 Th) is one of the most anticipated Bitcoin miners of 2022. The manufacturer has raised the standards when it comes to mining equipment capabilities. Once again, Bitmain didn’t disappoint when it came to the S19 Pro Hybrid miner. The miner comes with a maximum hashrate of 198 Th and power consumption of 5445W. Here’s more in our eye-opening BITMAIN ANTMINER S10 PRO+ HYB 198 TH REVIEW.

It seems Bitmain has made the right changes necessary for the miner. The miner is one of a kind thanks to the water-cooling system available. That means no naked wires are running from one end to another.

The miner also has a different design than other Bitmain or Bitcoin miners. It’s a sleek new design that makes the miner perfect for large-scale mining. There are several mineable coins, with Bitcoin being the most profitable.

Other coins to mine include Acoin, Curecoin, BitcoinCash, Terracoin, and more. You can mine a total of over 30 coins with this new mining unit. Also known as the j0-10, the miner release date is May 2022.

You can join several mining pools with this miner. These mining pools include AntPool, NiceHash, Poolin, SlushPool, and ViaBTC. We recommend joining a mining pool to increase your mining power.

Being a Bitcoin miner, the miner uses the SHA-256 algorithm. It’s the only hashing algorithm with no known vulnerabilities. The algorithm is also a one-way function that’s fast to compute and resistant to pre-images.

SHA-256 is also resistant to second-preimage attacks making it collision-resistant. It’s one of the algorithms recommended by NIST, thanks to its security walls. The algorithm is also known for the creation and management of addresses. Thus strengthening the Blockchain network.

The algorithm, we said, is more secure and produces a more comprehensive digest than most algorithms. That means a brute force attack would take years to break this algorithm. Simply put, it’s one of the best crypto hashing algorithms.

It comes with an efficiency of 0.28j/Gh thanks to its power. Moreover, the miner packs a punch as the maximum capacity is 5445W. High power makes syncing with the SHA-256 algorithm safer and easier to use.

The miner comes with a maximum voltage of 12v and uses the Ethernet interface. Thanks to the high power, you have a great miner that can mine for hours on end. It’s one of the most efficient Bitcoin miners the market has to offer.

With a maximum hashrate of 198 Th, this is a game-changer for mining Bitcoin. There’s no other Bitcoin miner with a higher hashing rate. A high hashrate means more computing power making it fast to verify transactions.

You have to give Bitmain credit for coming up with a water-cooling miner. There are no fans as the miner uses a water cooling system. It’s also a game-changer as no other miner has this mining unit.

Based on the current market estimate (early 2022), the miner would make $18 in daily profit. Daily electricity costs start at $15, and income starts at $34. The highest bitcoin miner for the year 2022.

The above information intends to educate the public about the above miner's capabilities. Miningwatchdog won't be held liable for any losses incurred while mining with the above unit.

Coins you can mine with Bitmain Antminer S19 Pro+ Hyd (198Th)