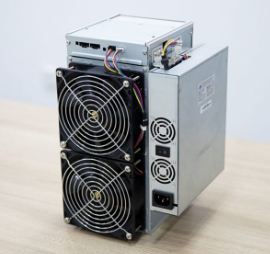 A look at the miner reveals that this is a well-designed Bitcoin miner. With a few naked wires at the side, the manufacturer came up with an attractive miner. There’s no ASIC support for the miner, which is one of the few downsides.

It comes with 7.6 Kgs, which is adequate for a Bitcoin miner. Most Bitcoin miners are currently doubling the weight. The dimensions and weight make it a perfect miner for large-scale mining. As it does not take much space, large-scale Bitcoin mining with this unit is plausible.

And this is one of the many reasons why this miner is largely out of stock. Miners took advantage of the release and have been profiting ever since.

You can join leading mining pools that support this miner. These pools include AntPool, F2Pool, NiceHash, SlushPool, ViaBTC, and more. By joining mining pools, you join a larger network that is stable and strong enough to mine coins faster. You can get this miner from leading stores as the manufacturer has run out of stock.

The miner uses the trusted and secure mining algorithm known to the Crypto industry. SHA-256 algorithm is best suited for mining Bitcoin for its safety. There has been no known vulnerability to this miner.

And this is one of the many reasons why mining Bitcoin is safer than other cryptos. The chip behind this unit is A3205, with 240 chipboards available. It comes with a chip size of 16nm.

Efficiency of the 1041 Canaan AvalonMiner

It comes with a quoted efficiency of 93 percent. And this is high considering that it’s a miner that was released two years ago. The miner has a high efficiency mainly due to the high power. It has a power consumption of 1763W and can be maximized to reach 2361W.

When you use the turbo mode, the hash rate and power consumption go upwards. It means that the turbo mode packs a punch when it comes to improving the unit's performance.

It comes with a hash rate of 31 TH/s which is huge considering the date of release. Most miners in 2019 had a hash rate of fewer than 20 TH/s. Canaan AvalonMiner is one of the first Bitcoin miners to hit the 30 TH’s mark.

And this proved that 1041 set a benchmark for other miners to follow. A high hash rate means that the miners get a more secure hashing network. You also get to mint new coins faster.

It comes with a sound emission of 70 decibels which is the standard for most Canaan miners. The sound capacity ensures that you can easily start a home mining activity. Those who prefer to use it on a large scale should not be worrying about noise complaints. These sound levels are environmentally friendly.

The Profitability of Canaan AvalonMiner 1041

With the recent rise in Bitcoin prices, the miner is still active and producing profitable results. The annual return percentage for this miner is 94 percent, with a profit ratio of 42 percent.

Warranty of the 1041 Canaan AvalonMiner

It comes with a 180-day warranty. Some stores may differ in terms of the warranty period.

We won't be held liable for any losses incurred while buying or mining with the above unit. Crypto mining is a risky investment. Mining watchdog is using the above information for educational purposes.

Coins you can mine with Canaan AvalonMiner 1041