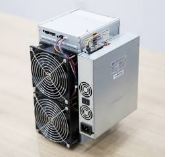 Canaan AvalonMiner 1041F is an improvement of the 1041 models. It does have a better hash rate and power compared to the predecessor. The Bitcoin miner uses the SHA-256 algorithm with a hash rate of 33.5 TH/s. It comes with a power consumption of 2110W, an improvement from 1763W from the 1041 original model. Even today, the miner is profitable a year and a half after its release. Get to know more in this thorough Canaan AvalonMiner 1041F Review.

It looks similar to the 1041 model in every sense. The only difference is the daily profitability, as the 1041F is much better. With the size almost the same, the dimensions can fool anyone. And this is another reason why the 1041F is also a perfect fit for large-scale Bitcoin mining. You can use it as it does not take much space. It’s also easy to install and setup, unlike other Bitcoin miners.

With Canaan models that date back to 2019, there’s no ASIC support for them. It means you won’t track the progress of mining while away. With mining taking time, it’s best to track down the progress even while you’re asleep. Newer Canaan AvalonMiner models have anticipated this and now have ASIC Non-Hub software.

Miners can take advantage of the numerous mining pools and increase their chances of mining Bitcoin. Thanks to mining pools such as AntPool and ViaBTC, you can now join a more secure network.

Sign up and start seeing the advantage of joining a large Bitcoin mining network. Most of the Canaan AvalonMiner 1041F is sold out. Only a few vendors still have this miner. In case you find one, it’s second hand but, these miners are still profitable.

Bitcoin mining uses the SHA-256 algorithm, which is the most secure hashing function. There are no known vulnerabilities with the Bitcoin mining network. The 1041F uses the A3205 miner with no information on the number of chipboards available.

It has a chip with 16nm, and currently, Peercoin is the most profitable coin. Other coins to mine using this Algorythm include Bitcoin Vault and HASHC SHA-256.

Efficiency of the 1041F Miner

For the miner to be effective and perform better, it has to be efficient. The efficiency of this miner is much better than the previous model. And this is as a result of having more power to boost performance.

Power consumption of 2110W is large enough to create an efficient miner. Miners will be wary of the fact that such high power usage will result in high electricity bills. That should not deter them as the daily reward outweighs the risk.

With a hash rate of 33.5 TH/s, this is one of the best Bitcoin miners in 2019. The high hash rate already surpassed the 30 TH mark. It’s a remarkable fete for a mining company to produce such as the powerful unit.

The high hash rate means that miners have a secure hashing network. You get to solve block puzzles faster and mine coins rapidly. Miners also get the full protection they need from the 51 percent attack.

Most Canaan Miners have a noise capacity of 70 decibels, and the 1041F is no different. It means you can set up the mining activity anywhere without worrying about any noise complaints. For those looking for large-scale Bitcoin mining, the sound levels with this miner are environmentally friendly. There should be no need for worry regarding noise complaints.

The Profitability of Canaan AvalonMiner 1041F

Two years after its release, the miner is still bringing in reasonable daily profit margins. The profit ratio is above 50 percent, which is amazing for such a miner.

Warranty of the 1041F Canaan AvalonMiner

With most stores already out of stock, the manufacturer will offer a 180-day warranty for this unit.

The above information is for educational purposes only. We won't be held liable for any losses incurred while mining with this unit. Crypto mining is a risky investment.

Coins you can mine with Canaan AvalonMiner 1041F