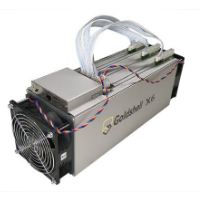 Goldshell X6 is the first miner in the X6 class and promises to be a handful. The X6 Litecoin miner is also proving to be profitable on the days following its release. With the manufacturer full of confidence, there’s a payback period of 247 days. It uses the Scrypt algorithm and has a maximum hash rate of 1620 MH/s. There’s maximum power consumption of 1600W, which is slightly less than the X5S version. Get to know more in this Goldshell X6 Review.

After months of waiting for this miner, the manufacturer finally came out with the goods. Miners should note that there are not enough X6 miners for everyone. It seems that the Goldshell manufacturer is releasing only a handful of these miners.

And the reason for this is that they have been releasing only Litecoin and Dogecoin miners. The manufacturer wants to create a switch and move to other coins.

The X6 does not disappoint as it comes bearing interesting features. With the low power and high hash rate, it means electricity bills are manageable. Miners can also join leading mining pools and enjoy the increased chances of mining more coins.

There are a total of eight profitable coins to mine with this unit. Most of these coins are exotic and include DigiByte, Emerald, Gulden, and more.

With the miner using the Scrypt algorithm, users are happy with the speed that comes with it. The Scrypt algorithm is known for solving block puzzles faster than any other hashing algorithm. It’s also able to confirm Crypto transactions quickly than other algorithms.

This is one of the main reasons why pundits prefer this algorithm due to its speed. It utilizes high-speed memory to generate Crypto coins at a faster rate.

Efficiency of the X6 Goldshell Miner

1000W/G is the efficiency that comes with this miner. Although it’s slightly less than the X5S, the power efficiency is high. You get to mine these coins at a lower cost than any other Litecoin miner. The manufacturer did their best in trying to lower the cost of mining.

And this is a crowd puller as more and more miners will prefer this over other units. It’s also a perfect option for large-scale mining, thanks to its low efficiency and storage space.

It comes with a nominal hash rate of 1620 MH/s which is impressive for such a miner. The miner has a high hash rate and still manages to have low power consumption. Goldshell is trying to pull all the stops when it comes to the miner’s efficiency and performance.

Both of these features are vital in ensuring a miner’s workload. You get a miner that is full of promise when it comes to producing Dogecoin and Litecoin.

For the miner to work effectively, it has to be set under recommended settings. The miner has to work at fewer than 5 percent minimum and 95 percent maximum humidity levels. Temperature is another vital feature as more than the required amount will lead to overheating.

As fate would have it, immediately the miner went to the market, it was highly profitable. It came with a profit ratio of 54 percent and an annual return percentage of 135 percent. With a payback period of less than a year, those who bought it had a profitable mining experience.

It comes with a 6-month warranty that only covers the initial buyer.

Mining watchdog is providing the above information for educational purposes. We won't be held liable for any losses incurred while mining with the above miner. Crypto mining is a risky investment.

Coins you can mine with Goldshell X6