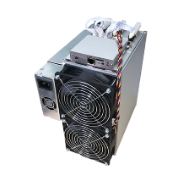 Goldshell X6S Litecoin Miner is a unique miner with three miner modes. It comes with a high hash rate, low power consumption, and multiple mining modes. With the miner, you get ARM Cortex-A9 Controller, smart temperature control, and advanced management software. It comes with a maximum hash rate of 1780 MH/s and uses the Scrypt algorithm. Litecoin and Dogecoin are some of the top coins to mine with this unit. There’s the maximum power consumption of 2250W. Read this detailed Goldshell X6S Features and specs review for more.

Attributes and characteristics of Goldshell X6S

The overall design of the miner shows a unit with naked wires at the top. There’s no change from the X5 or X6 series in terms of design. The manufacturer has made the miner weigh less and comes in at 5Kgs.

It’s a perfect miner for large-scale mining as it uses less space. It also comes with a power-weight of 1.5Kgs. There are over eight coins to mine with this unit. Some of these include Auroracoin, DigiByte, GameCredits, Verge, and more.

For those looking to increase their chances of mining these coins, joining a mining pool is helpful. Leading Litecoin and Dogecoin mining pools include AntPool, Easy2Mine, Litecoinpool, and more.

You can buy this miner directly from the manufacturer as there’s no store with this unit. The manufacturer wants to sell the miner on their own terms. It is at a disadvantage as users get a high warranty duration.

With the miner mining Litecoin and Dogecoin, it goes without saying it's using the Scrypt algorithm. One of the advantages of this hashing algorithm is the quick confirmation of Crypto transactions. It utilizes high-speed memory to generate Crypto coins at a faster rate than most hashing algorithms.

The algorithm also solves more block puzzles faster and thus, mines more coins. It’s also one of the safest hashing algorithms to use.

Efficiency of the X6S Litecoin Miner

Today’s manufacturer should be clear with the exact number of the efficiency rate. X6S is not offering such, and we have to go with the basic number 1780M/2250W. What is worth mentioning is that the miner packs a punch and boosts performance. The power consumption of 2250W is higher than most Litecoin miners.

And this gives the unit the ability to mine coins faster than most. It’s a game-changer for the Scrypt algorithm as it also increases electricity costs.

The miner has an impressive hash rate of 1780 MH/s which is high enough for us. With this hash rate, miners get to solve blocks quickly than other Litecoin miners. The advantage of having a high hash rate also plays a hand in security.

Miners enjoy the benefit of protection against the 51 percent attack. A high hash rate ensures you get the coins you want quickly, thanks to the power consumption. These two must go together to increase the efficiency and performance of a miner.

Humidity and temperature play an integral part in ensuring the performance are optimal. The manufacturer has set recommended settings for both these features. Working humidity should be 0 percent minimum and 95 percent maximum.

To avoid overheating, the maximum working temperature should be 35 degrees Celsius, with 0 Degrees Celsius being the minimum. It also comes with a 7000rpm fan that helps with cooling.

The Profitability of Goldshell X6S

With the manufacturer claiming that this is the last of the X6 series, the profitability should be high. After its release, users were happy with the results, with an estimated profit ratio of 34 percent. The annual return percentage was 76 percent. It goes to show that this was a profitable miner from the date of release.

Warranty of the X6S Litecoin Miner

The miner comes with a warranty of six months that only covers the initial buyer.

The above information is for educational purposes only. Mining Watchdog won't be held liable for any losses incurred while mining with the above unit. Kindly note that Crypto mining is a risky investment.

Coins you can mine with Goldshell X6S Litecoin Miner