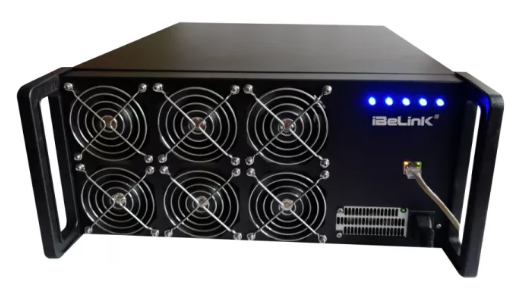 iBeLink DSM6T is using the Blake256R14 algorithm and has a maximum power consumption of 2100W. The efficiency of this miner comes in at 0.35j/Gh, and Decred is the mineable coin. Moneroo.io is the main distributor of this miner, and the price includes PSU. The technical specifications allow users to get a highly stable miner. It uses the Ethernet Interface and weighs 17600g. Much heavier than other miners in the iBeLink store, this one promises to deliver profitable Decred coins.

Also known as DCR 6 Th/s, the miner packs a punch when balancing efficiency and power consumption. Decred is the only mineable coin, which gives the miner the freedom to mine just a single coin. With this miner, you can get exotic coins which are profitable in most market conditions. It was released in June 2018, and the size of the miner is recorded at 490*180*390mm.

There are a handful of mining pools that are associated with this miner. These pools include CoinMine, F2Pool, Luxor, and Poolin. You can buy this miner from Moneroo.io or selected stores.

Algorithm of the DCR 6 Th/s

It comes with an efficiency of 0.35j/Gh, one of the lowest in the market. The low efficiency is associated with mining, just one coin. It would be weird to have a high-efficiency rate when mining just one coin. There’s a lot to give credit to when it comes to efficiency. A low efficiency, coupled with low power consumption, is what miners want. It means that the electricity cost will be at a minimum.

6 Th/s is the hash rate that comes with this miner. Although the hash rate is less compared to other miners, the reason is simple. The miner only mines one coin and thus, the low hash rate. With this hash rate, miners can get a unit that is complete for Decred mining. You are solely concentrating on getting one coin at an optimum hash rate. The hash rate is enough to give miners a profitable outcome.

With humidity and temperature playing a vital role in miners, we need to check the manufacturer’s specifications. The manufacturer has set minimum humidity at 5 percent minimum and 95 percent maximum. You also get minimum temperature levels set at 0 degrees centigrade and a maximum of 40 degrees centigrade. There are six fans available to help with cooling.

It comes with 78 decibels of sound, which is fairly high for home use. Even though it has 78 decibels, you can still use the miner at home. Those who have large mining farms should feel at ease with this miner. The noise levels are environmentally friendly, which means no noise complaints from neighbors.

The Profitability of iBeLink DSM6T 6 Th/s

With today’s market conditions, you get a profit ratio of – 93 percent and an annual return percentage of -60 percent. The return per day is -$5, and in a year, it’s marked at -$2,000. You should note that the miner’s profitability is affected by electricity costs and market conditions.

Warranty of the 6 Th/s DSM6T

The manufacturer offers a 180-day warranty from the date of shipping. Other stores might offer fewer days in terms of the warranty. There’s no payback period with this miner.

The information shown above is for educational purposes. Before embarking on mining, ensure you understand the risks that come with Crypto mining.

Coins you can mine with iBeLink DSM6T