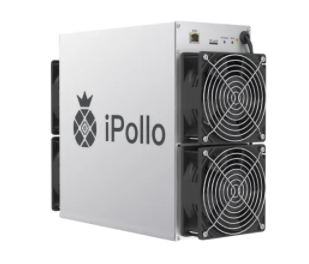 iPollo B2 is another miner set to be released in the same month as the previous model, the B1. Also known as the iPollo II, it’s a Bitcoin miner and uses the SHA-256 algorithm. The miner comes with a maximum hashrate of 110 Th/s. With a maximum power consumption of 3250W, it makes it a reliable Bitcoin miner. Here’s the full iPollo B2 Review for more.

A Brief Overview of iPollo B2

When you look at it for the first time, you won’t notice any changes. The design is completely the same as the previous model. However, there are a few changes the manufacturer has made to ensure the miner works effectively.

For starters, the power consumption is lower than the previous model. And this makes the iPollo II cost-friendly to Bitcoin miners. Talking about Bitcoin, you can mine a total of 40 coins with the B2 iPollo.

To join a mining pool with this miner is a great idea. You can join leading mining pools such as Antpool, Nicehash, Poolin, SlushPool, and ViaBTC. These mining pools ensure you solve block puzzles faster, resulting in mining more coins.

As we publish this review, the miner is slated to be released in October 2021. The only way to get this miner is by pre-purchase. Currently, there are no stores that have this miner. Therefore, you will be dealing directly with the manufacturer.

Algorythm of iPollo B II

Did you know that the SHA-256 algorithm doesn’t have any known vulnerabilities? As a result, it makes it one of the most secure hashing algorithms to use. And this is why mining Bitcoin is secure in every sense.

Most crypto experts recommend it due to its strong hashing. In addition, the algorithm is resistant to preimage attacks and is collision-resistant. Although the performance-wise is 15 percent slower than other algorithms, it’s still the most secure.

Efficiency of the B II iPollo

The manufacturer has made improvements to the efficiency of this model. It comes with an efficiency of 0.03j/Gh. The maximum power consumption is also lower than the B1 model making it better.

You have a miner with a maximum power consumption of 3250W. And this gives miners the power to mine 42 coins. So high efficiency means high productivity and fast coin mining. It’s what every miner wants to hear alongside affordable electricity costs.

Hashrate of the iPollo B2

Mining hardware with a high hashrate is seen as more efficient. And the results speak for themselves as you mine more coins. Miners will contribute more hashing power to the network and thus, solve more puzzles.

For the miner to work effectively, you have to use it in favorable room conditions. The manufacturer has set a maximum of 95 percent for humidity. High-temperature levels mean the miner might overheat and fail to mine.

The maximum temperature levels should be 45 degrees Celsius.

Profitability of the iPollo B2

With the current market price, the daily profitability with this miner stands at $20 to $40. Depending on the coin price, this will change as time goes by. The daily electricity cost is $9, which makes it pocket-friendly.

Since you are currently getting the miner straight from the manufacturer, the warranty should be good. The minimum period we expect the manufacturer to offer is six months.

The above information is for educational purposes only. Miningwatchdo won't be held liable for any losses incurred while mining with the above unit. Consult the manufacturer before making any purchase.

Coins you can mine with iPollo B2