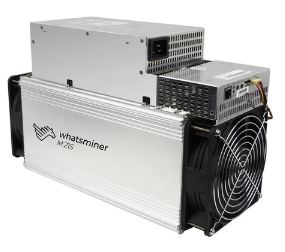 MicroBT Whatsminer M21S 52 TH/s is an improved version of the original with only 30 pieces available. The new miner comes with a slightly lower hash rate than the original, which had 56 TH/s. The miner is a Bitcoin miner that uses the SHA-256 algorithm with a maximum power consumption of 3120W. This version also has less power, but the results are impressive nonetheless. Read this conclusive MicroBT Whatsminer M21S 52 TH/s review and get to know all the specs.

You can mine a total of 43 coins with this improved version. The design is similar to the original M21S unit, with no changes made. Bitcoin and Bitcoin cash are the top coins to mine with this unit.

It weighs 12.5 Kgs, and its dimensions make it an easy-to-use unit. The miner is an option for large-scale Bitcoin mining as it does not take much space. You will get an Ethernet network with a maximum power voltage of 12V.

There are reputable pools to join and increase your chances of mining when it comes to mining pools. These mining pools include AntPool, F2Pool, NiceHash, SlushPool, ViaBTC, and more. Coin mining central is the only vendor who is authorized to sell this unit.

You get full customer support before and after each purchase. The typical delivery for this unit is three to five days. Other coins to watch out for include eMark and Unbreakable.

One of the reasons why Bitcoin is a top profit coin is the security with the hashing algorithm. It comes with a secure algorithm that has no known vulnerabilities. The SHA-256 algorithm is seen as the best in terms of safety and speed.

With this algorithm, users get the much-deserved protection from the 51 percent attack. You get an algorithm that mints new Bitcoin faster thanks to the high hash rate.
The miner is using a chip with a size of 12nm, and the name is TSMC.

Efficiency of the Whatsminer M21S 52 TH/s

There’s no exact number on the efficiency of the M21S 52 TH/s. The manufacturer and vendor should put this information out to the public. Nonetheless, we can use the standard version of 52T/3120.

We do note that the efficiency is large enough for a profitable mining experience. Miners should brace themselves for high electricity bills. It would be best if you didn’t worry about the cost of running the miner as it does guarantee daily profit margins.

52 TH/s is a bit low considering that new miners have a hash rate of more than 100 TH/s. The manufacturer wants to give newbies a chance to mine properly with this unit. It’s also a profitable hashing algorithm as it solves blocking puzzles faster.

You solve the block reward puzzle faster thanks to the high hash rate. That’s why miners go for units with a hash rate of more than 100 TH/s. It helps mint new coins at a secure rate.

All miners must follow strict rules and recommended settings for the unit to work effectively. The temperature settings play a vital role in ensuring you get a miner that mines for longer. With a miner's lifespan playing a part in ensuring longevity and productivity, kindly adhere to the settings. The maximum temperature to use is 40 degrees Celsius and a minimum of 0 degrees Celsius.

With Bitcoin prices soaring each day, the profitability of this miner is acceptable. It comes with a profit ratio of more than 100 percent. The annual return percentage is also favorable to miners.

Warranty of the Whatsminer M21s 52 TH/s

The above information is for educational purposes only. We won't be held liable for any losses incurred while buying or mining with the above unit. Please note that Crypto mining is a risky investment.

Coins you can mine with MICROBT WHATSMINER M21S (52TH/S)