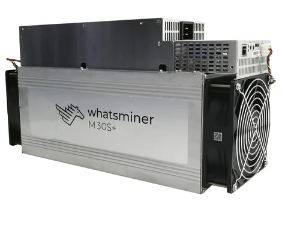 MicroBT Whatsminer M30S++ 108 TH/s is another improved version of the previous model. With the original model out of stock, MicroBT has decided to produce 30 more, which has a slight improvement in hash rate and power. The new model comes with a hash rate of 108 TH/s and power consumption of 3410W. It’s a Bitcoin miner and thus, uses the SHA-256 algorithm. Learn the improvement the manufacturer has made in this honest MicroBT M30S++ 108 TH/s review.

The overall appearance of the new miner has not changed. It still looks like other M30S miners from the MicroBT Company. What’s new is the improved hash rate which has jumped by 40 TH/s.

Miners now have more hashing power which gives them the much-needed mining advantage. The original M30S++ miner was released in April 2020 and others in October 2020. All of these miners are currently active and produce profitability of around $18 daily.

Another alternative to increasing your chances of minting new Bitcoin is joining a mining pool. Top mining pools that support this miner include AntPool, NiceHash, Poolin, SlushPool, and ViaBTC.

By joining these pools, you get to join a network that will increase your mining chances faster. Coin Mining Central is the only shop that has 30 units. The shop is a trusted vendor and is reliable.

It’s the safest hashing function that the Crypto mining industry knows. With no vulnerabilities, it ensures that miners get the protection needed from the 51 percent attack. The hashing algorithm is safe to use and is recommended by experts and pundits.

There’s no value given in regards to the efficiency of this miner. We have to use the standard value of 108T/3348W. With this value, we can conclude that the efficiency is high and is around 0.030j/Gh. The high efficiency is as a result of adding more power to the miner. Power consumption of 3348 gives the miner a boost in performance.

Miners should know that this extra power comes at a cost. The electricity cost will be higher than the original version. Most miners will say that the risk is work the reward with this unit.

108 TH/s is slightly less than the original model, which came with 112 TH/s. The miner also has a lower power consumption rate than the original version. What makes this miner impressive is the timing. With only a few units to buy, the profitability is almost the same.

It does not remove the fact that this miner still has a high hash rate. A high hash rate means you get to solve mining blocks faster and mint new coins. It’s a risk worth taking as profits are a guarantee.

The miner still comes with an environmentally friendly sound volume of 75 decibels. It means you can use it at home without worrying about noise complaints. It’s also a perfect miner for large-scale Bitcoin mining. The unit comes with 2 fans that help with cooling and avoids overheating.

According to recent market estimates, the M30S++ 108 TH/s has a profit ratio of 200 percent. The miner comes with an annual return percentage of over 350 percent, which is impressive. With the price of Bitcoin predicted to rise, this miner could not have come at a better time.

Coin Mining Central is the only vendor with this unit. Before making any purchase, ask about the warranty period and the terms.

The above information is intended to educate parties on the features of the above unit. Mining watchdog won't be liable for any losses incurred while buying or mining with the above unit. Kindly note that Crypto mining is a risky investment.