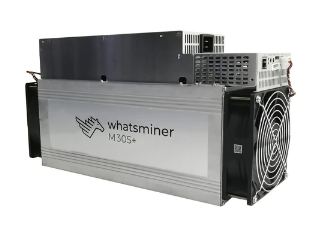 MicroBT has over the years produced profitable miners, and MicroBT M30S++ 110 TH/s is no different. There only a handful of these miners in stores. Thirty is the exact number, with the miner’s first release being April 2020. New batches of the M30++ 110 TH/s are no available for the taking. The unit comes with a maximum hash rate of 110 TH/s and power consumption of 3410W. It’s a Bitcoin mining unit and, as such, uses the SHA-256 algorithm. Learn more in this clear MicroBT M30S++ 110 TH/s review.

The miner has the same look as other MicroBT units that miner Bitcoin. It weighs 11 Kgs, and miners can get a total of 43 coins with this unit. Bitcoin and Bitcoin cash are top coins to mine with this unit.

DigiByte is another coin to look out for as it’s highly profitable under the SHA-256 algorithm. The miner is fully ASIC supported, which means you can monitor the progress of mining while away.

Miners can also join leading mining pools and create a bigger network for mining Bitcoin. The network enables users to mint new coins faster than in an individual setup. Some of the mining pools to join include AntPool, NiceHash, Poolin, ViaBTC, and more.

The official distributor of the new miner is Coin Mining central. There are only thirty units left for anyone looking to profit from this unit.

SHA-256 Algorithm is efficient and reliable, unlike other hashing functions. The algorithm is known for its safety and stability. Miners under this algorithm know that they are fully protected from the 51 percent attack.

The algorithm also guarantees data security while making transactions. It’s one of the many reasons why mining Bitcoin is safe than other coins. And this makes the unit highly efficient and performs better than most miners.

With no value given by the manufacturer regarding the new units, we have to use the standard measurements. The miner comes with an efficiency of 110T/3410W, which is impressive, to say the least.

What miners should look out for is the high power consumption which will increase electricity costs. Bitcoin mining requires high power for the users to mine fresh coins faster. And this is risk miners are willing to take.

110 TH/s is a new frontier when it comes to mining Bitcoin. The hash rate has already surpassed the 100 TH mark, which is impressive. Miners get a high processing power for the network and thus, get better security.

The main advantage of using a high hash rate is having increased security. Miners also get the advantage of solving blocks faster than miners with a low hash rate. It’s the reason why miners are over the heels with this unit.

Miners need to work under certain machine and room temperature to be effective. You want a miner that runs efficiently and mines longer. To avoid overheating, the manufacturer recommends a maximum of 45 degrees Celsius.

There’s a minimum cap of 0 degrees Celsius when using the above miner. You get two fans that help with cooling, which is another added advantage. Miners mine for longer without the worry of overheating.

With the miner coming back after the first batch sold out, this improved version is already profitable. The improved version has more power and a higher hash rate. There’s a profit ratio of over 180 percent and an annual return percentage of over 300 percent.

Since it’s a mining shop that distributes this unit, it’s best to ask before making the purchase. Coin mining central does not indicate the exact warranty period.

The above information is for educational purposes only. Mining watchdog won't be held liable for any losses incurred while mining with the above unit. Kindly note that Crypto mining is a risky investment.