Is Bitcoin mining and the African tech community on the same spectrum? 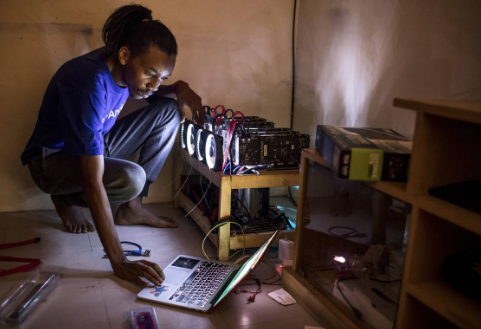 There are promising statements worldwide on how the next bitcoin mining gold rush will happen in Africa. Is BITCOIN MINING IN AFRICA FEASIBLE? But statements will always be statements. In reality, the African tech community doesn’t seem to be on the same spectrum as bitcoin mining.

As easy as it sound,s it requires a lot of energy as ASIC miners consume a lot more electrical power than the average west African gets daily. In addition to strict regulations and victimization from security forces, the outrageously high cost of setting up a mining rig makes bitcoin mining an almost nonexistent activity in west Africa.

Can Crypto mining thrive in Africa?

Even though Africa contributes less than 11% of the total bitcoin hash rate due mainly to unfriendly policies and lack of infrastructure. The mining communities are thriving alongside these dangerous conditions with Nigeria, Ghana, South Africa, Kenya, Uganda, and Egypt.

These countries all have conditions that both encourage and retard the growth of the mining community in Africa.

The economy is one of the main reasons why Kenya’s mining community has not grown by large margins in years. The mining hardware is pricey, and only a few people can afford one.

A Kenyan made an internet sensation when he was on CNN for running a mini mining rig from his living room. Mr. Muthai was on CNN’s Africa tech rising in 2017. He stated that he kept his rig running even through power outages. Muthai went from being a farmer to mining cryptocurrency.

Muthai states that all his gadgets are imports, and he set up a system that runs despite the country’s constant power outages. A quarter of Muthia’s $800 a month income goes to paying the electricity bills. This issue is rampant across most African countries, and this undermines the crypto mining community in Africa.

In Ghana. The mining community has multiplied even with strong resistance from the Ghanaian central bank. Unlike other central financial facilities, cryptocurrencies are far from being recognizable in Ghana. Most notably is the Ghana dot com and tech solutions company that offers cloud mining services. It was established in 2016 to foster and improve bitcoin adoption in Africa.

In South Africa, there is no restrain against the use of cryptocurrencies and blockchain technology. The South African government and its central bank have gone as far as laying down plans to develop a government-issued coin for use.

The South African economy is more extensive and more robust than most of its African counterparts. As such, citizens can afford to buy mining hardware at a relatively affordable rate. The presence of bit mart stores makes it even easier for miners to purchase gear and don’t have to import hardware to set up their rigs.

In Nigeria, crypto activities have been on the rise since the beginning of 2020. Also, government policies have serially stumbled on Africa’s 7th most populous country and its biggest economy, the bitcoin mining community. In Nigeria, it is legal to trade and or possess bitcoin, but the Nigerian central bank warns its citizens of the dangers of falling for cryptocurrency scams.

There’s a stigma in the crypto community increases due to involvement in crypto scams and fraud across the continent by Nigerians. In turn, it has a ripple effect on Nigeria’s security agencies, who, in a bid to curb scams and dissuade scammers, harass and extort early adopters of crypto mining in the country.

The bitcoin mining network in Egypt is currently underground as the government associates all crypto mining activities with illegal activities. However, low electricity rates and affordable hardware translates to a higher profit margin for miners in Egypt and are worth getting caught by the authorities.

What is holding Africa back?

As large as the African continent is, only a few countries can boast of crypto mining services or communities. The hindrances to crypt mining activities in Africa appear to be on top of one another. It starts from the individual and then moves higher up till it reaches the government.

Cost of Crypto Mining in Africa

Assuming you were to start up a mining rig. A simple mining rig will consist of an ASIC mining rig connected to a real computer. This Asics mining rig can cost upwards from $5000, which translates to very high amounts in various African currencies except for South Africa.

Very few people from the countries mentioned can afford to build a bitcoin mining rig. Those who can afford it are not always willing to give such an amount as seed funding since most of everything about blockchain and cryptocurrency is understood by a few.

For the few who can afford to set up mining rigs, the high electricity tariffs and unsteady power supply poses another problem. The problem can be solved by using power generators that consume fuel or diesel. In the long run, the cost of maintaining electricity will reduce the profit margin of a crypto miner’s earnings.

If you are fortunate enough to afford a mining rig and have an affordable yet constant power supply, harsh government regulations can threaten your operations.

And lastly, mining hardware processes a lot of data and so produces a lot of heat. A miner would have to invest heavily in cooling gadgets to keep the rig going and the profits steady. The problems faced are many consequences of bad governance and our lack of education on blockchain technology’s importance.

One of the biggest hindrances to mining activities in Africa is the high cost of electricity and its unstable supply. Solar energy can provide the perfect alternative energy source to foster the establishment of crypto mining rigs for Africans by Africans.

With the new foray into alternative electricity sources, countries like Kenya, Morocco, and Uganda are ready to establish solar power plants.

The construction of solar plants will likely result in lower electricity costs for crypto mining rigs. Start-ups and IT solutions companies can now set up mining pools in African countries.

Africa has both wind and solar energy in abundance. Making use of these resources can significantly foster the growth of crypto mining rigs in Africa.

Cloud mining as a way out

Cloud mining involves tapping into the processing power of large mining hardware remotely, for a stipulated amount. The African crypto mining community, as at this moment, thrives on cloud mining services to control its crypto mining activities. Most Africans who can’t afford the cost of setting up a rig can earn through cloud mining.

Cloud mining is the current way of accessing crypto mining activities. However, there’s not enough education and access to these services because of the stigma around cryptocurrencies. Africa is well underway to becoming the world’s bitcoin hub. The hindrances are making adoption crawl at a snail’s pace.

There has to be education and the “de-stigmatization” of cryptocurrency and blockchain. It’s the only way for us to go from barely 11% of mining activities worldwide to a full-blown mining hub.

HOW TO AVOID CRYPTO SCAMS IN 2..

TOP MINING POOLS IN THE WORLD ..