Haven protocol is an untraceable cryptocurrency that proposes a new way of achieving stable fiat value storage. This is achieved while being traded at market value by incorporating new technologies.

Primarily it is a cryptocurrency with a mix of real-world asset-pegged value storage. It achieves this through a minting and burning process within a single blockchain. The parent website havenprotocol.org claims that the coin is easily convertible into different currencies, including USD, CNY, and GOLD. Users can convert $1 worth of Haven coins into USD and vice versa. Though relatively new compared to other cryptocurrencies.

Insight and overview of Haven Protocol

The official website allows anyone to create a wallet or refer to it as a vault where one can store coins, transfer them, or convert them into different assets. This vault offers a secure way of interacting with one's coins without the interference of go-betweens or third-parties, which may steal your addresses and passwords.

This, therefore, renders the currency very secure. The cash is also based on Monero, which is well known for its privacy and stealth; this offers users anonymity and privacy when performing transactions.

Therefore, transactions cannot be traced hence providing anonymity online or even on the deep web. Haven offers offshore storage, which provides investors with a stone-cold currency that is not subject to market fluctuations. 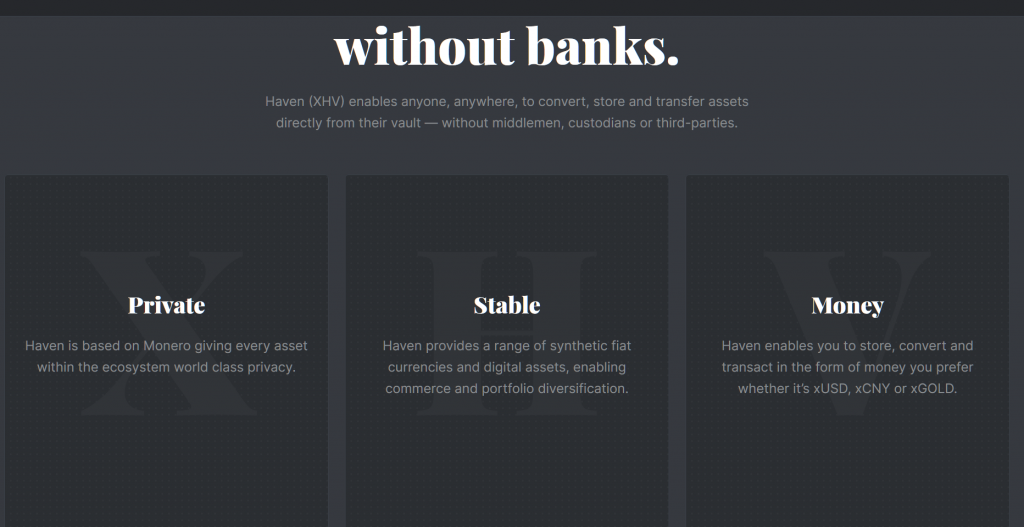 The coin's stability is achieved with an algorithmic dual coin blockchain, which is characteristic of all coins that aren't asset backed.

This blockchain uses a two-coin system to facilitate the fluctuations in the supply of Haven coins(XHV). When users burn XHV, an equivalent amount in asset or currency is produced.

The Team of Haven Protocol

The team behind this developed Haven as an open-source project and promises to releases its code every year after security audits. The principle of being open source gives users some knowledge in computer languages to review the ins and outs of the different platforms that Haven vault can be hosted .

The team reviews its code and makes new developments and improvements to ensure that user platforms offer the best security and user experience. The developer team includes Dweab, Pierre Lafitte, Neac, and Marty, who are the team lead, and several contribute groups.

Compared to Bitcoin, Haven coins can be converted into cash via the Haven Protocol vault and used where the money is needed.

Haven offers faster transaction time, unlike bitcoin, which takes a lot of time before confirmation of a transfer. Haven is on the rise and easy to invest in, whether through mining or purchasing coins, unlike Bitcoin, which requires heavy investment.

The lack of third parties or intermediaries selling XHV eliminates the risk of ripping off their money and ensures that one buys coins directly from the official website.

How to mine Haven protocol coin (XHV)

Mining is one of the recommended ways to accrue hefty returns, . Mine is made available for solo mining and pool mining. In solo mining, one undertakes the mining process at the comfort of their living room by the use of a personal computer; GPU's are used. However, for pool mining, one joins a group of miners by contributing the computational power toward the resolving of an advanced Mathematical problem. Notably, the pools that enable haven mining charge a fee of 1% or less. Some of these pools available on the website.

Advantages and disadvantages based on track records

Other advantages also include

Our take on Haven Protocol currency

As different cryptocurrencies emerge up into the market, anonymous altcoins simply fully utilize the niche on platforms such as Darknet and other networks that require high caliber levels of anonymity. For this, we think such with all the security features and different developments, it seems that the heaven protocol cryptocurrency is one of them made available to anyone who wishes to perform an anonymous transaction without the revelation of crucial credentials.

Cryptocurrencies are smart money and a lucrative investment venture. Haven Protocol is growing steadily, and as with any investment, you should do your research before putting in your money. You can acquire Haven coin by buying them on exchange like Poloniex.

What People Are Saying About HavenProtocol